From obs 4/4/20: "Avalanche, 4th of July Couloir, Beehive. No person was caught. A dog was caught but not buried. Crown between 2 and 5 inches, based on cracking depth during ascent and pictures. Runout aproximately 120x40 yards. Estimated using gaia gps.

Myself, a partner, and my dog left the busy Beehive parking lot at approximately 0945 this morning (04/04). We noted no instabilities on the approach other than a small debris field under a cornice on the east facing aspect of the ridge to the southwest of Beehive peak. Given the lack of a cornice on our intended route, and the small size of the noted avalanche, we decided to dig a pit and make our decision based on those results.

We dug our pit at the base of the bowl, right under the peak, and had no result. On our ascent, we noted some cracking, which would break on a depth of between 2 and 5 inches. We decided that we would continue, unless the cracking started breaking significantly deeper, based on the relatively light snow and mellow run out. In hindsight, this was a poor decision, especially given the dog with us. Once we got up, we briefly considered skiing the northern aspect, but decided against it based on evidence of wind grooming and the constriction on that side.

The first half of our descent was smooth, although the skiing was somewhat punchy, evidence of wind affected snow. Right after the narrowest part of the couloir I felt the snow under me start to move, but I was able to ski to the right, out of the path. Although the dog was caught, she was fortunately not buried and sustained no injuries. My partner was above me, not in line of sight, and did not know the slide had occurred until he skied down to me. The slide was witnessed by at least two other parties in Beehive." 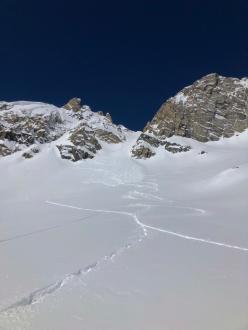 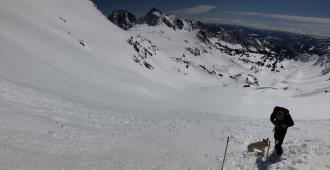 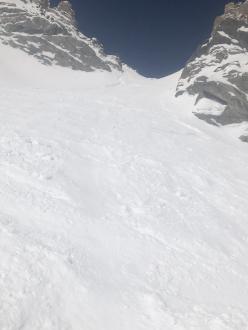