Write up from the party:

Here’s the story to go with it if you care to read. Sorry it’s a long one; I am processing.

We approached from the Blackmore/Elephant saddle and headed towards the bowl just south of Alex Lowe Peak. At around 9,450 ft we stopped to do an ECT and got nothing to move. Still skeptical about how the new snow was bonded to the old snow, we also did a propagation saw test at that interface and got the new snow to budge only after cutting 95% through. The interface felt relatively sticky and the new snow did not slide off the column.

We resumed our ascent, moving south around a rocky outcrop, and then north ‘till we were just about above the outcrop. We had thought about continuing north across the bowl to reach the tree-covered east ridge (it is the way my partner approached it many years ago) but the idea of crossing the bowl above rock outcroppings was not enticing so I instead cut west, directly up the fall line (the bowl is not that steep there). When it got a bit steeper, I starting moving slightly south of west (north would have taken me above the rocks again). My thought was to gain the ridge as soon as possible, and then travel on the relative safety of the ridge. After climbing another 150 feet I felt a startling large whumph. I relaxed for a split second because nothing seemed to be moving but my partner told me “heads up” and when I did look up I realized that the trigger had propagated about 150 feet upslope, to near the ridge. By then, snow was already sliding towards me and I had little time to react. I assessed that the sliding snow was not very deep and not moving very fast and decided to try and dig my edges in. It worked for a second but eventually knocked me off my feet. I glided helplessly past my partner, who had been waiting a 100 feet behind on the skin track. He did not get caught. I slid about 250 vertical feet, to near where had done our ECT. I never picked up too much speed and had plenty of time to think about doing what I could to stay on the surface (kind of star-fished on my back seemed to work). The snow was relatively dense but not cohesive. When the sluff started to slow down to a stop I stood up as tall as I could to hopefully keep my head above snow. Turns out it never got higher than my thighs and I was able to get out with little effort. There is an annotated picture below.

In trying to analyze what we did right and/or wrong I believe that our biggest mistake was to underestimate the effect of wind loading near the ridge, and the fact that the new/old snow interface could be (was) vastly different 250 feet higher in elevation. Ironically, last week after touring in Beehive I personally reported isolated wind slabs, which maybe what got me today. My partner expressed that for him, it was the failure to factor in the “new snow,” having been lulled into a misguided sense that we have now transitioned into spring skiing with a hard settled base. The fact that we do not share the same view may be an indication that we are not communicating as well as we should. Anyhow, what I think we did right was to be continually assessing the “what-ifs” as we were choosing our line of ascent. I think it is what saved us from any serious consequences. I basically slid down the hill on a giant snow couch until I came to a stop. Still, it was an unsettling experience.

Incidentally, on our way out we watched two skiers climbing to the top of a gully on the SE face of Blackmore, which made me nervous. When I looked up again 5 minutes later, the gully had slid. Luckily, based on their tracks it looks like they triggered it from the top without getting caught and then skied it. The first skier was already at the bottom and the second was on his way down. Maybe you will get a report from that in your mailbox too." 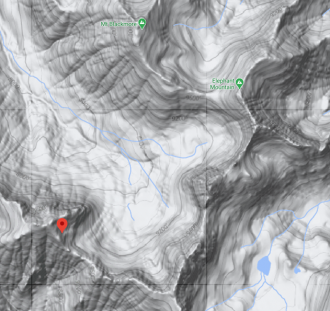 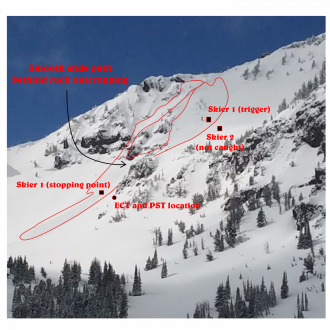