Skier caught in slough in the The Great One

From e-mail 11/7/21: "Today, my partner and I set out to ski The Great One, with a plan to come up and over Sac Peak and then walk the ridge to Naya Nikki before skiing the Great One into Airplane Bowl. We found more snow than expected at the TH, about 6inches. On our way up to the pass just north of Sac we noticed the characteristic wind stripping down to scree on the trail to the pass. On one of the switch backs we were able to get about an 1-2” deep wind slab to propagate but not move down slope. Given the depth, we didn’t put too much stock into this. We proceeded to walk the almost snow free trail over to Naya Nuki before booting down to the top of the Great One. The skiers left side of the Couloir had some obvious wind load and after a few ski cuts felt comfortable continuing to ski. After my partner skied the majority of the top section, I followed and was entrained and taken for a slide in my own ‘slough’. I was carried about 40’ before I stopped, while the slough kept running for another 100-150’ arresting on the shallower angled slope before the break in the Couloir wall that feeds into Airplane Bowl. The entrained width of moving snow was about 3-5’ wide. There were no injuries, and we continued down to the base of the Couloir, deciding it would be more dangerous to try and go back up to get out. Once in airplane bowl we saw multiple large slides that ran last night, syn-storm. Most of which came down from the East face of Sac. A few 200-300’ wide and running the length of the bowl. Early season hubris, and is not even thinking about overnight wind totals has us more or less absent minded when we set out this morning. A mistake that could’ve been a lot worse if the slough had taken a larger wind pocket with it, and carried me over the same aspect that led to the fatality in the Great One last fall. No pictures of the slough, attached is a grainy cell phone pic of the slides in Airplane Bowl." 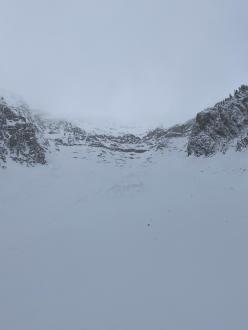