Good morning. This is Doug Chabot with the season’s 140th and last Avalanche Advisory of the season, issued on Wednesday, April 15 at 7:30 a.m. This advisory does not apply to operating ski areas.

On Saturday a skier was killed in an avalanche as he descended a steep couloir on Beehive Peak in the northern Madison Range.  He triggered a small slide (10-20’ wide) that swept him over cliffs.  We visited the area on Monday and made a video that shows the terrain and tells a brief story of what happened. Many photos and a few weather graphs about the accident are posted on our website.  A detailed final report will be posted in the coming day.

My oh my, a snowstorm. Yesterday afternoon the sky darkened, temperatures dropped, winds calmed and snow fell. This morning there are 5-6 inches in the mountains south of Bozeman to Big Sky and Carrot Basin. The Bridger Range and mountains around West Yellowstone and Cooke City got 1-2 inches. Scattered snowfall may add another inch or two before the storm exits later this morning. Winds are 10-20 mph out of the west to northwest and mountain temperatures range from 10-20F.

The rest of the week will be sunny with temperatures reaching the 50s in the mountains. The weekend and early next week will be slightly cooler and partly sunny, so enjoy the new snow while it’s here, because it will melt fast.

Our snowpack is generally stable and our main avalanche concern is how well this new snow is bonding to the old surface. Up to six inches fell (.5 inches of SWE) and it’s still snowing at 6 a.m. Gusts of 20 mph are enough to create small wind drifts, and as the avalanche accident on Saturday illustrates even a small drift can be deadly if it breaks above cliffs. The storm started warm and wet and got colder through the evening which will help the snow stick in place. I do not expect the new snow to be very sensitive to triggering today, but there a few warning signs to look out for: cracks shooting out from your skis and recent avalanches are both signs of instability. Today’s six inches of snow along with Sunday’s seven inches is enough to warrant an inspection, especially above treeline where melting was negligible and winds were strong. Dig a quick extended column test in the top foot of snow to see if the column propagates a fracture: if it does, descend another slope.

Tomorrow we will update this advisory with some general avalanche advice tailored to spring avalanche concerns.

Our advisory Hotline is getting upgraded and not working this morning. 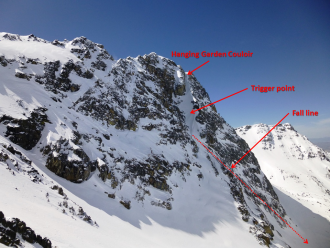 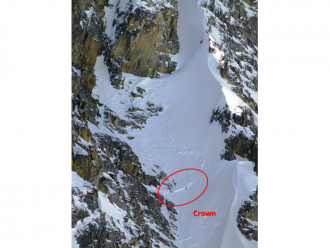