Good Morning and Merry Christmas. This is Doug Chabot with the Gallatin National Forest Avalanche Forecast on Wednesday, December 25th at 7:00 a.m. Today’s forecast is in appreciation of everyone who reads or listens to the advisories, watches our videos, or send us observations. This forecast does not apply to operating ski areas.

This morning we all know who has been naughty and nice. Me, I saw black coal dust rimming my stocking so I ignored it, a tactic of the naughty. Folks around West Yellowstone have been nice and they were rewarded with 8-12” of new snow since yesterday morning. The Taylor Fork received 7”, Big Sky and Cooke City 4-5” and the mountains around Bozeman 2”. Winds are from the west to southwest and have lessened to 10-20 mph from yesterday’s 40 mph gusts. Mountain temperatures are 15-20 F.  Today will be cloudy, temperatures will rise into the mid-20s, wind will remain the same and scattered snowfall will drop a trace to an inch.

The avalanche danger in the Lionhead area near West Yellowstone has risen substantially. Yesterday 8-12” of snow measured .8-1” of snow water equivalent (SWE), the largest snowfall of the season. The snowpack has a thick layer of weak, sugary snow at the ground that will avalanche. Southwest wind gusted to 40 mph during the storm and wind drifts at the ridgeline may have already slid or are dangerously close to doing so. Triggering avalanches is likely, even from far away, like the bottom of a slope. Alex and I rode into this area on Sunday and determined the snowpack would fail to hold the weight of this amount new snow (video, photo). Avoid being on or underneath avalanche terrain. For today, the avalanche danger is rated HIGH on any slope that has been wind-loaded and CONSIDERABLE on all others.

The mountains around Big Sky, Taylor Fork and Cooke City have two things in common: they received 4-5” of new snow totaling .4” of SWE, and they have weak layers 1-2 feet under the surface. These layers are sometimes breaking in stability tests which we saw during our field investigations in Taylor Fork on Monday (video) and Beehive Basin on Sunday (video). On Saturday, a large avalanche occurred south of Cooke City on a wind-loaded slope (details and photo). Alex’s video from Cooke City outlines our general concerns over much of the forecast area: weak layers exist, some slopes are unstable, and the best way to determine stability without obvious clues such as cracking, collapsing or recent avalanche activity, is to dig and test. For today, the avalanche danger is rated MODERATE since triggering avalanches is possible.

For Christmas, the Bridger and northern Gallatin Ranges got 2” of snow, a cosmetic upgrade.  Yesterday, my partner and I went into the Throne in the northern Bridger Range. We found 3 feet of stable snow at 8200’, but getting to that elevation required snowmobiling and skiing on mere inches of snow (video). We dug on this slope 3 weeks ago yet the snow depth is the same and the layers have gotten stronger (snowpits: 12/2 and 12/24). Until we get more snow avalanches are unlikely in the mountains around Bozeman. For today, the avalanche danger is rated LOW on all slopes.

Accident reports from the recent fatalities in Colorado and Utah are worth reading to learn from. Check them out here: Utah Report, Colorado Report. 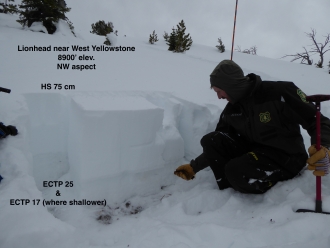 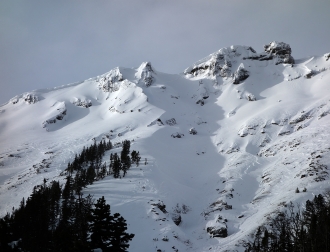