Good Morning. This is Dave Zinn with the Gallatin National Forest Avalanche Forecast on Tuesday, January 14th at 7:15 a.m. Today’s forecast is sponsored by Mystery Ranch and World Boards. This forecast does not apply to operating ski areas.

The mountains around West Yellowstone and Cooke City received 3-5” of snow in the last 24 hours, Big Sky to the north remained dry. Temperatures were 5-15 F degrees and winds were 10-20 mph from the southwest. Today, West Yellowstone and Cooke City will get 4-8” of snow with 2-3” in the northern ranges. Winds will be 15-30 mph from the southwest and temperatures will be in the teens.

The southern ranges near West Yellowstone have the weakest snowpack structure in our advisory area and, in the last two days, they received the most snow. With 10-16” equal to 1-1.4” of snow water equivalent (SWE) (video) and 4-8” forecast today, dangerous avalanche conditions persist. The most likely avalanches will occur within the new snow and in areas where the wind is depositing large drifts of snow, but large avalanches failing on weak layers near the ground are possible as new snow stresses the snowpack (photo, photo). Either of these avalanche concerns will be large enough to bury, injure, or kill a skier or rider. Today, careful route finding to avoid steep slopes and runout zones will keep you out of harm’s way. The avalanche danger is CONSIDERABLE on all slopes.

Yesterday in Cooke City, skiers approaching Meridian Peak remotely triggered an avalanche that broke 15” deep and 50’ wide (avalanche activity). This avalanche was relatively large on the path in which it occurred and gives us a window into what could happen on a bigger slope. While I was pleasantly surprised by the stability I found in my snowpits there the last two days, the key information is that more than 50” of snow fell since New Year’s Day and we saw large plumes of snow create by the wind (video, video, photo). Avalanches breaking within freshly deposited drifts of snow will be large and avalanches breaking on weak layers deep in the snowpack will be deadly and remain a consideration. Avoid steep wind loaded slopes and assess non-wind loaded terrain before entering avalanche terrain. The avalanche danger is CONSIDERABLE on wind loaded slopes and MODERATE on non-wind loaded slopes.

The Northern Gallatin Range has received less snow than the rest of our advisory area and has a generally strong snowpack. With 13” of new snow and 1” of SWE in the last six days, the primary concern is snow drifted by winds gusting into the 40s mph. Alex explains these issues in his video from Mount Blackmore on Saturday. With continued winds and light snowfall forecast for today, avoid areas with freshly drifted snow and watch for cracks shooting out from your feet as signs of instability. Assess slopes for the consequences of small avalanches before committing to steep terrain.  Avalanche danger is MODERATE on wind loaded slopes and LOW on non-wind loaded slopes.

Webpage dedicated to the Centennial Range in Idaho and Montana

“Likelihood is not Danger”. See this recent blog from the Flathead Avalanche Center discussing how potential size and consequences of avalanches can determine our travel advice. 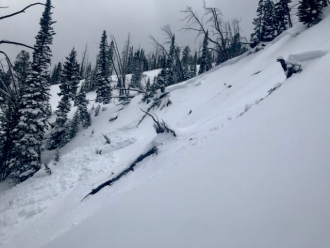 We toured into Meridian today. On our approach we remote triggered a soft slab on 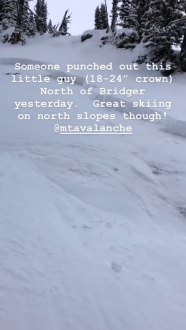 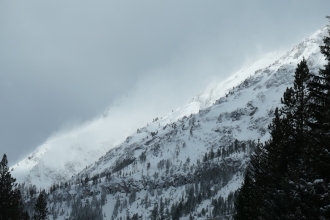 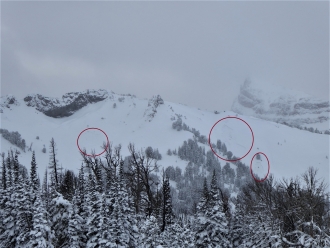 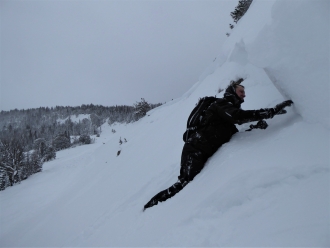