Good Morning. This is Dave Zinn with the Gallatin National Forest Avalanche Forecast on Tuesday, February 4th at 7:00 a.m. Today’s forecast is sponsored by Swiss Fit Montana and Uphill Pursuits. This forecast does not apply to operating ski areas.

Temperatures this morning are in the single digits above and below zero F and there is no new snow. East winds shifted through the northern half of the compass and are currently 5-15 mph from the west Bozeman to Big Sky and from the north in the mountains near West Yellowstone and Cooke City. Today, temperatures will rise to the upper single digits to mid-teens F, winds will blow from the west to southwest at 10-20 mph, and the mountains will get a trace of snow tonight.

On Monday morning, the Shower Falls Snotel Site reported 9” of new snow with 0.6” of snow water equivalent (SWE). Yesterday, my partner and I toured into Mount Ellis and were unwilling to go into steep terrain because we feared we would trigger an avalanche. On our approach, the weak snowpack “whumphed” and cracked as we walked through areas where east winds had deposited snow in abnormal drifts (video). Slopes with a thin and weak snowpack, such as Mt. Ellis, Flanders, and Wheeler, will be especially susceptible to avalanches breaking deep on buried weak layers (video). However, wind created problems all over the range. Climbers in the Main Fork of Hyalite triggered a small wind slab in high consequence terrain (avalanche activity) and skiers at Mount Blackmore reported fresh drifts of snow avalanching naturally on the north face and running 1000’ downslope.

The avalanche danger spiked during and immediately after the new snow fell on Sunday. Today, signs of instability like cracking and “whumphing” will be less likely, but the underlying problem is still present. Avoid steep wind loaded terrain and assess non-wind loaded slopes before entering avalanche terrain. The danger is CONSIDERABLE on wind loaded terrain, MODERATE everywhere else.

Strong winds and 7-14” of new snow over the weekend increased the avalanche danger. Wind loading is the common denominator in recent avalanche activity. In Cooke City, skiers reported seeing large deep slab avalanches and shallower slides where the wind had drifted snow (photo 1, 2, 3). Skiers in Beehive Basin observed drifts in unusual areas from the east winds and stayed out of avalanche terrain after observing cracking and a recent natural avalanche above the Going Home Chute. Alex intentionally triggered a wind slab to demonstrate the problem as he describes in his video. Avalanches within fresh drifts will be the most likely problem today, but large avalanches failing deep in the snowpack are still possible. While Doug might be tired of mentioning weak snow buried at the bottom of our snowpack (video), a 6-8’ deep avalanche that ran on Sunday on Naya Nuki demonstrates its continued relevance (avalanche details). I was still seeing failures on this layer on recent field days in Cooke City (video) and Ian was not ready to trust the layer of sugary snow near the ground even as it is showing signs of strengthening in Lionhead (video).

Use extra caution on slopes with fresh drifts of snow and assess all slopes for stability before entering avalanche terrain. Today, human triggered avalanches are possible and the avalanche danger is rated MODERATE

Thank You, King and Queen of the Ridge Hikers!

Thanks to the 52 hikers and 9 Teams who rallied their supporters and fundraised for the event. "Strange Cattle of Map Brewing" raised the most money and Mountain Project hiked the most. New Age Artisans and Highline Partners rallied together for the second most hikes. The entire board of the Friends of the Avalanche Center and the avalanche forecasters thank you!

See our mid-season snowpack summary for a review of the deep slab avalanche problem and general (conservative) travel advice.

Cracking and Collapsing on Mt Ellis
Wind Slabs and Weak Facets in Cooke City - 2 Feb 2020
10" of new snow, Bridgers 2 Feb
The great one 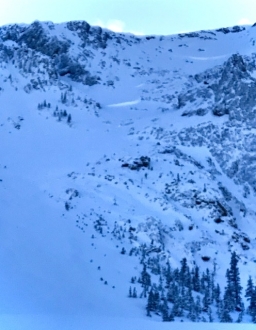 Saw this today while skiing. This crown is on a northeast aspect at about 8600 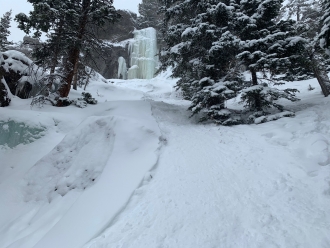 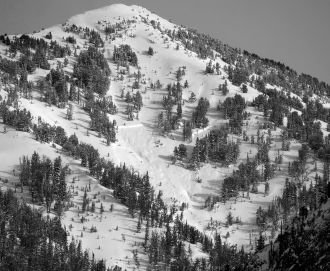