Good Morning. This is Doug Chabot with the Gallatin National Forest Avalanche Forecast on Sunday, February 16th at 7:00 a.m. Today’s forecast is sponsored by Grizzly Outfitters and Spark R&D. This forecast does not apply to operating ski areas.

Last night, 9”of pixie dust fell around Big Sky, and 4” in the other ranges. Wind is west to southwest averaging 20 mph with gusts of 35 mph. Under cloudy skies temperatures are 15-20F and will rise into the mid-20s. Today will remain breezy with W-SW gusts of 35 mph and snowfall will continue. By morning the mountains will have another 4-6” and 6-10” in Big Sky and Cooke City.

Yesterday, in the northern mountains, skiers saw a few natural avalanches that released on Friday from the strong wind and fresh snow. Today’s wind and snowfall will bring an uptick in avalanche activity. Multiple parties reported a very large avalanche in Divide Basin up Hyalite estimated a ½ to 1 mile wide and near 10 feet deep (photos and details). That’s our entire season’s snowpack! Every snowpack has a breaking point and the slopes in Divide Basin clearly reached it. I’m predicting that other slopes are also dangerously close.

Today will remain snowy and windy and this morning’s snowfall makes a 48-hour total of 9-12” (.5-.8 snow water equivalent, SWE). Wind is west to southwest at 20-35 mph, a perfect speed to build wind drifts. These dense slabs will be easy to trigger and some may break at the ground. As recent activity in Divide Basin illustrates, avalanches can be large and deep. Another long running slide was seen in Bear Basin (photo and details). Skiers saw this large slide after not get anything remarkable in their stability tests. It broke near the ground from a cornice fall the day before. They turned around because avalanches are real while tests are a proxy.

For today, given the recent avalanche activity, new snow and wind, the avalanche danger is rated CONSIDERABLE on all wind-loaded slopes and MODERATE on all others.

New snow and wind in the southern mountains is keeping the possibility of avalanches alive. Wind drifts with the new snow could be triggered near the ridgelines. Furthermore, we’ve received reports of collapsing and cracking in the southern Gallatin Range (details), most notably where the snowpack is thin (i.e. lower elevations). Skiers around Cooke City had a few small wind drifts crack as they toured, but nothing widespread. Yesterday, I rode into Lionhead and dug to the ground in a 6’ deep snowpack with relatively good stability. As I mention in my video, wind-loaded areas are the biggest worry with a secondary concern of sugary facets at the ground that could avalanche. Do not get on steep or wind-loaded slopes if you get cracking or collapsing; these are classic warnings a skier or rider could trigger a slide.  Given today’s snowfall and wind, avalanches are still possible in the southern mountains and the danger is rated MODERATE.

Is ski cutting a tool you use to manage avalanche hazard? This video by Bruce Jamieson lays out ways to reduce the risk and also why you might want to think twice before ski cutting in the backcountry, especially with the snowpack we have this year where deep slab avalanches are a possibility. 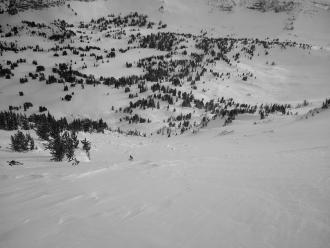 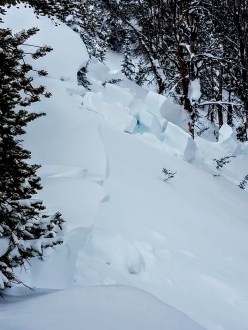 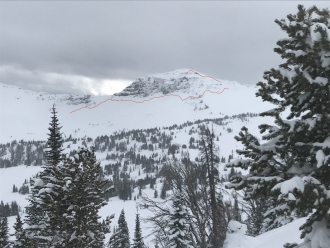 Skied the NE shoulder of Divide Peak. Spotted a 1/4 to 1/2 mile long crown