Good Morning. This is Doug Chabot with the Gallatin National Forest Avalanche Forecast on Monday, February 17th at 6:45 a.m. Today’s forecast is sponsored by Swiss Fit Montana and Your Montana Chevy Dealers. This forecast does not apply to operating ski areas.

In the last 24 hours 2-4” has fallen throughout our forecast area with westerly winds averaging 15 mph and gusting 30-40 mph. Temperatures this morning are in the single digits and will rise into the high teens. Winds will lessen today and scattered snow showers will drop another 2-4” by morning. The rest of the week looks to be sunny with warming temperatures.

In the northern mountains there has been a lot of natural avalanche activity. Most slides broke Friday and Saturday. Many were large, deep and broke trees. Our Photos page and Avalanche Activity page are bursting at the seams with avalanches. Some notable ones:

Most of the avalanches were on heavily wind-loaded terrain, but not all. Some were triggered by cornice falls, and the larger slides broke at the ground on the sugary facets that formed in November. What is astonishing is how these slopes did not go with the big storm a week ago, and instead broke with just a few more inches of snow and wind. Like the proverbial ‘straw that broke the camel’s back’ we just witnessed how every snowpack has its breaking point.

Natural activity will become more unlikely today, but triggering slides remains very real. Terrain that folks might normally think of as “safe” are questionable, especially low elevation hills. These have a thin snowpack consisting of very weak snow now capped with a couple feet of snow. Avalanches on Chestnut Mountain, near Lick Creek, and Wheeler Mountain are evidence that slopes near History Rock, Mt Ellis, Beehive Basin and other low lying areas are untrustworthy. The one word avalanche danger, Moderate or Considerable, does not capture the overall seriousness of traveling in avalanche terrain.

In the southern mountains, including West Yellowstone and Cooke City, there has been new snow and wind most of the last 7 days. A snow biker on Saturday triggered an avalanche in Taylor Fork (photo), and a large avalanche on the east face of Woody Ridge, south of Cooke City, avalanched on Friday. Dave is in Cooke City. His concerns are two-fold: winds have drifted snow that could avalanche, and weak, sugary snow at the ground still has the potential to slide. He could feel the unconsolidated snow at the ground when he probed into the 10-foot deep snowpack (video). His concerns mirrored mine in Lionhead on Saturday (video). For today, avalanches are still possible and the danger is rated MODERATE. Do not get on steep slopes or wind-loaded slopes if you get cracking or collapsing.

The recent avalanches have been large and some have occurred in unusual locations. Our Photos page and Avalanche Activity page are bursting at the seams with avalanche reports. 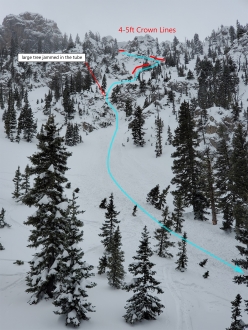 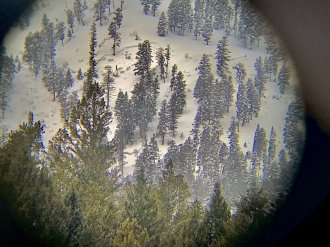 From an observation, "R3-4 D2 avalanche that failed at the ground observed from the Trail 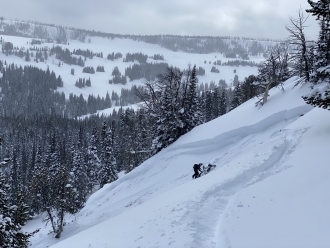 Slide in Taylor’s Fork, crown of about 5-6’ and about 100' wide. Human triggered. Photo