Good Morning. This is Ian Hoyer with the Gallatin National Forest Avalanche Forecast on Thursday, February 20th at 7:00 a.m. Today’s forecast is sponsored by Montana State Parks and Swiss Fit Montana. This forecast does not apply to operating ski areas.

There is no new snow this morning. Temperatures are in the single digits to teens F and will rise to the high 20s and low 30s F. Winds are 10-20 mph out of the south and west (north near Cooke City). It will be another beautiful day of blue skies and light winds. The next chance for new snow is on Sunday.

With blue skies, light winds, and plenty of soft snow left to find, it’s going to be a very pleasant day in the mountains and it would be easy to get lulled into a sense of complacency. But don’t forget that we’re just on the tail end of an intense and long lasting avalanche cycle. Yesterday was only the second day in the whole month of February that we didn’t get a report of a new avalanche (avalanche log). Without new snow, the snowpack will slowly adjust and stabilize but we’re not quite there yet.

Since Monday, a snowmobiler triggered an avalanche near Cooke City that broke 3-4’ deep and 100’ wide across a small slope (photo and details), a rider triggered a large avalanche more than four feet deep that failed on weak snow near the ground on Buck Ridge (details), and several large natural avalanches broke on heavily wind loaded slopes on Wilson Peak near Big Sky (photo). Recent avalanche activity is a clear sign that avalanches remain possible. The weak layers near the ground need more of a break from loading before we can trust them. Conservative terrain choices remain prudent.

With sunny skies and temperatures rising to near freezing, we also need to start thinking about wet snow avalanches. I don’t expect a big hazard, but be on alert if the snow surface gets wet and you see rollerballs or pinwheels.

The avalanche danger is rated MODERATE.

Avalanches are unlikely in the mountains around West Yellowstone. Yesterday, Doug and I were on Skyline Ridge and had great visibility. We could see across much of the southern mountains and saw plenty of tracks on steep slopes, but didn’t see any recent avalanches (video). This fits with what we’ve seen near Lionhead (video). The last reported slide in the southern Madison Range was on Saturday in Taylor Fork (details) and it’s been a month since the last large slide was reported near Lionhead (details). The weak snow at the ground is still there, but you’d have to get very unlucky to trigger an avalanche. Cover your bases by riding one at a time on steep slopes and watching your partners from a safe spot that is out of the runout zone. The avalanche danger is LOW.

On Saturday, three motorized snowbikers were caught in an avalanche in Colorado and two were killed. We are deeply saddened by this accident. You can read the preliminary accident report here. Please take the time to learn what we can from this and all accidents. Stay safe if you are getting into the mountains today. 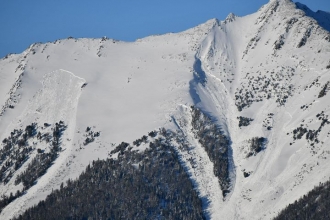 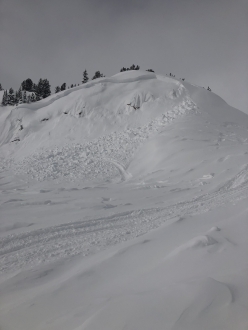 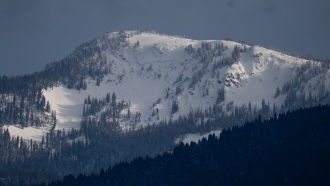