Good Morning. This is Doug Chabot with the Gallatin National Forest Avalanche Forecast on Thursday, February 27th at 7:15 a.m. Today’s forecast is sponsored by Spark R&D and Montana Alpine Guides. This forecast does not apply to operating ski areas.

In the last 24 hours, Cooke City picked up 3” of new snow with a trace to 1” falling everywhere else. Under clearing skies mountain temperatures are in the teens and wind is blowing W-NW at 10-20 mph and gusting to 25-40 mph. Today will be sunny and temperatures will climb into the 30sF. Wind will continue to be westerly and gusty. Expect another sunny day tomorrow and snow this weekend.

Yesterday, wind drifted snow at the ridgelines. Overall these drifts were not very sensitive. However, a cornice broke midday atop the east-facing Hourglass Chute north of Bridger Bowl and triggered a 3-4 foot deep x 100-foot wide slide (photos and details). The avalanche broke on sugary facets at the ground and serves as a reminder that this layer is still a concern throughout the northern mountains. Dave rode into Wheeler Mountain in the northern Gallatin Range yesterday and looked at old crowns from a few weeks ago where he found the same layer breaking clean in his snowpit, a sign of lingering instability (video). This also mirrored his finding from Beehive Basin on Monday (video). Yesterday, skiers in Hyalite found 2’ thick wind drifts on Maid of the Mist which were glued down, a positive sign, but not an ironclad one. They did not get any shooting cracks, collapses or other red flags. These would be signs to avoid avalanche terrain. Winds continued last night and triggering fresh wind-drifts remains possible, which, if you were unlucky, could break deep into old snow. For today, the avalanche danger is rated MODERATE on all slopes.

The mountains around Cooke City received 3” of snow without much wind. Like the southern Gallatin Range, southern Madison Range and Lionhead area, the snowpack is similarly stable. A few rogue wind slabs might be triggered, but these would be small. Ian investigated the snowpack both south and north of Cooke City and reported good stability (video). Sugary facets at the ground remain an afterthought since it would take a large load or getting extremely unlucky to trigger a slide. Around Lionhead and the other southern ranges there has been no recent avalanches or red flags (video). This zone has not gotten much snow lately and its good stability reflects that lack of loading.  In general, triggering avalanches is unlikely and the danger is rated LOW.

This article is intense and has some good lessons in it: A skier shares what happened the day he lost his wife to an avalanche. 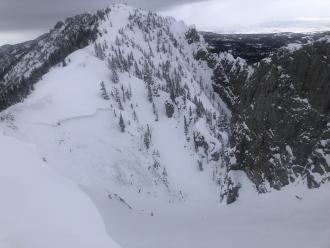 Looking north at the crown of the cornice triggered slide in the Hourglass, north of

END_OF_DOCUMENT_TOKEN_TO_BE_REPLACED
Looking up at the Hourglass avalanche 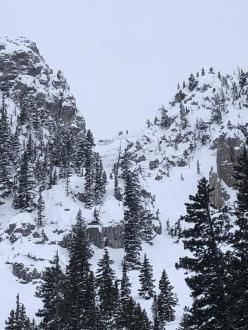 The avalanche crown (3-4 feet deep) is visible near the ridgeline. Photo: BBSP