Good Morning. This is Dave Zinn with the Gallatin National Forest Avalanche Forecast on Tuesday, March 3rd at 7:00 a.m. Today’s forecast is in memory of Ben Richards. Ben was killed in an avalanche thirteen years ago today. He will be forever missed and remembered. This advisory does not apply to operating ski areas.

Last night the mountains received 1-3” of new snow. Winds averaged 15-30 mph from the west to southwest and gusted up to 65 mph at the Flanders weather station in Hyalite Canyon. This morning temperatures are in the teens to low 20s F. Today winds will blow 25-35 mph from the west in the northern ranges and 15-20 mph in the southern ranges. Temperatures will climb into the 20s to low 30s F. This morning Cooke City will receive a 1” of snow with a trace elsewhere before skies clear this afternoon.

In the northern ranges moderate to strong winds gusted up to 50 mph and 65 mph in Hyalite Canyon. These winds are building fresh drifts of snow and increasing the size of already enormous cornices. While the 1-3" of new snow won't add much widespread stress to the snowpack, it will provide ammunition for wind loading. Yesterday at Buck Ridge we triggered a 6” deep wind drift on a small test slope. We also observed a natural cornice collapse in Second Yellowmule. Avoid these behemoths as they can fail much farther back than expected (video). Additionally, cornice collapses may trigger deeper avalanches on the slopes below. This story played out in the Hourglass Chute north of Bridger Bowl last Thursday (photo). Deep instabilities are less sensitive without a more significant load, but triggering avalanches on weak facets near the ground is still possible. We rode conservatively yesterday because of this possibility and less than a week ago a backcountry trail groomer triggered an avalanche on this layer that rolled the snowcat and driver 165 feet down the hill (video, photo and details).

Today, avoid wind loaded slopes and cornices while maintaining a healthy fear of the less likely possibility of avalanches breaking on deeply buried weak layers. Human triggered avalanches are possible and the danger is MODERATE.

In the southern ranges and in the mountains around Cooke City moderate winds from the southwest to the west are creating new drifts of snow and increasing the size of cornices. These cornices can break far back from the edge resulting in a dangerous fall alongside school bus-sized blocks of snow and potentially triggering avalanches on slopes below. Today, wind drifts are especially concerning near high consequence terrain traps such as above trees, cliffs and gullies (video). It has been several weeks since we have received any reports of avalanches failing on deeply buried weak layers and stability continues to improve (video). However, last Thursday skiers in the Southern Gallatin Range collapsed a slope that shifted an inch downhill before arresting. The skiers listened to the message and stayed in lower angle terrain (details).

Minimize your exposure to wind loaded slopes with high consequence runouts, assess the snowpack and employ safe travel protocols when in avalanche terrain. Human triggered avalanches are unlikely and the danger is rated LOW.

MSU film student, Nate Kenney made Propagation, a video that profiles GNFAC forecaster Alex Marienthal and highlights what we do at the Avalanche Center. Thanks, Nate! Nice job. 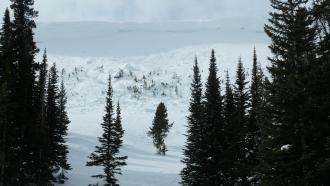 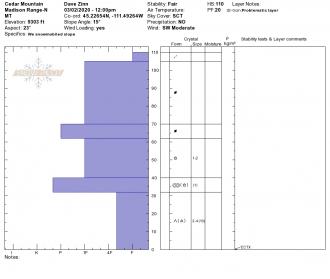 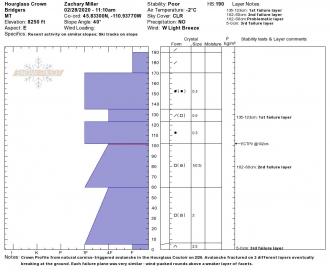