Good Morning. This is Dave Zinn with the Gallatin National Forest Avalanche Forecast on Monday, March 9th at 7:00 a.m. Today’s forecast is sponsored by Spark R&D and Beartooth Powder Guides. This advisory does not apply to operating ski areas.

In the last 24 hours the mountains around Cooke City and West Yellowstone received an inch of snow yesterday morning, the Bridger Range picked up 2” last night and the rest of the advisory area remained dry. Winds were 5-15 mph from the southwest to the west. This morning, temperatures are in the teens to low 20s F. Temperatures today will rise into the upper 20s to low 30s F with winds from the west to southwest at 5-15 mph. By tomorrow morning the mountains around Big Sky and Cooke City will have 3-5” of new snow with other areas receiving 1-3”.

Dry snow avalanches will be the primary avalanche concern today. These avalanches will likely be confined to the 3-9” of new snow from the last 36 hours and will slide on a thick melt-freeze crust. Watch for signs of increasing instability such as shooting cracks and collapsing as snow begins to fall later today. Yesterday provided numerous examples of the likely hazard. Skiers on Saddle Peak triggered avalanches that broke 8” deep and piled debris 5-6’ deep in the runouts (details). On Mount Blackmore, tourers reported dry, loose snow avalanches on the east face (details and photo). This new snow hazard was our primary concern in Beehive Basin (video). As people are stepping out into more varied terrain, they will find areas of isolated instability such as a group in Middle Basin that intentionally released a storm slab in a 40-degree chute with a ski cut (details and photos). In high consequence terrain like this, a small avalanche can push a skier or rider off cliffs and into obstacles. Do not underestimate the risks of small avalanches in this context.

In addition to new snow avalanches, cornices are a significant hazard as they have grown large and will break far back from the edge triggering avalanches failing on deeper weak layers on slopes below. An intentional cornice drop and subsequent avalanche in the Northern Gallatin Range on Saturday provides an excellent example of this (photo, video and details).

Yesterday, climbers and skiers reported wet loose avalanches at lower elevations (details). Today, the wet avalanche hazard will be limited, but sinking into a wet and unsupportable snowpack is an indicator that the snowpack has lost cohesion and could avalanche. Learn more about wet snow avalanches in Ian’s video from Mount Ellis. This hazard is most likely found on lower elevation slopes with more exposure to the sun.

Today, follow standard safe travel protocols, assess the snowpack for isolated instabilities and carefully manage the hazard of avalanches if you choose to step out into steep terrain. The dry snow danger is LOW. With overcast skies and light snow, the wet snow avalanche danger is LOW. 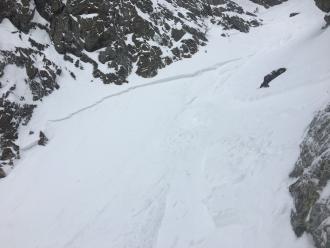 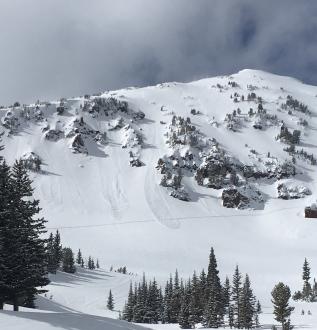 Dry loose avalanches on Blackmore. The snow stayed surprisingly cold and dry throughout the day

END_OF_DOCUMENT_TOKEN_TO_BE_REPLACED
Looking down the path of the cornice triggered avalanche 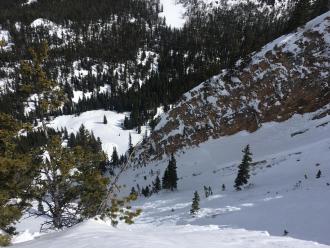