Good Morning. This is Dave Zinn with the Gallatin National Forest Avalanche Forecast on Monday, February 1st at 7:15 a.m. Today's forecast is sponsored by Montana Chevy Dealers and Highline Partners. This forecast does not apply to operating ski areas.

Many natural and human-triggered avalanches broke deep within the snowpack at Lionhead and in the Southern Madison and Southern Gallatin Ranges when 18-26” of snow equal to 1.5-2.2” of snow water equivalent (SWE) loaded a weak snowpack from Wednesday night through Saturday. Yesterday, while riding in the Taylor Fork, Alex and I saw many recent avalanches, including one that was approximately a quarter-mile wide (video, photo). On Saturday, a pair of skiers triggered a very large avalanche from a long distance away near Bacon Rind (photos and details). Others in the Southern Gallatin Range experienced large collapses that rippled out and knocked the snow from the trees (photos and details).

Avalanches failed on a layer of weak surface hoar buried 1-2 feet deep and on sugary depth hoar near the ground. Both of these layers will take time to adjust to the weight of recent snow. Careful route finding and snowpack assessment along with a conservative mindset are the best tools when dealing with a snowpack containing multiple persistent weak layers. Large, human-triggered avalanches are possible and the danger is MODERATE.

Cooke City received 12-18” of low-density snow (0.9” SWE) Thursday to Saturday and many natural and skier-triggered avalanches broke at the interface between the old surface snow and the new snow, some from a long distance away (details, photo, photo). Other avalanches failed deeply on weak layers buried around 3 feet deep including a large avalanche on the Fin and another northwest of Cooke City (details and photo, photo). Doug described the two weak layers now buried 1 foot deep and 2-3 feet deep that are responsible for these avalanches in his video from last week (video).

Utilize a careful snowpack assessment along with cautious route-finding and a conservative mindset today. Signs of instability such as recent avalanche activity, collapsing, or cracking in the snowpack are reasons to abandon plans to enter avalanche terrain. Human-triggered avalanches are possible and the danger is MODERATE.

Friday night into Saturday, the mountains around Big Sky and Bozeman received 7-11” of snow equal to 0.5-0.7” snow water equivalent (SWE). Saturday, skiers near Maid of the Mist saw a large slab avalanche (photo) while Doug and others observed many natural loose snow avalanches running fast and far on a weak layer of near-surface facets (video, details and photos). Skiers in Beehive Basin saw multiple slab avalanches that took out the new snow (photo) and a skier nearby in Dudley Creek triggered a new snow avalanche that subsequently stepped down onto deeply buried weak layers (photo). Avalanches below the new and wind-drifted snow are the primary concern today and the danger is rated MODERATE.

On Saturday, January 30th a skier died in an avalanche in Utah outside the Park City Ski Area boundary. The search and recovery efforts were initially delayed due to dangerous avalanche conditions and were completed on January 31st. We are deeply saddened by this loss of life. Preliminary details are available here. 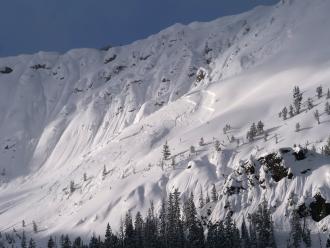 END_OF_DOCUMENT_TOKEN_TO_BE_REPLACED
Natural Avalanche on the Fin 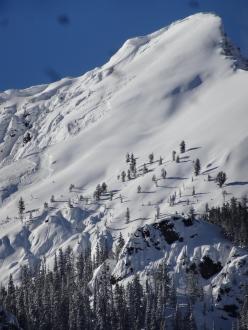 A large avalanche failed naturally on January 30th. It broke deep in the snowpack on 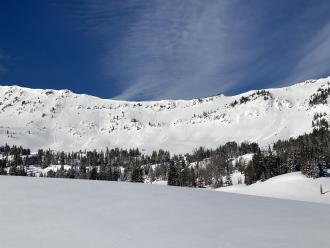 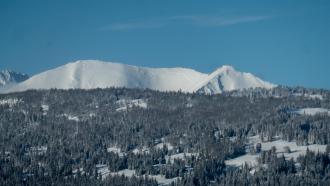