Good Morning. This is Dave Zinn with the Gallatin National Forest Avalanche Forecast on Tuesday, February 2nd at 7:15 a.m. Today's forecast is sponsored by Knoff Group Real Estate and Beartooth Powder Guides. This forecast does not apply to operating ski areas.

Lionhead and the Southern Gallatin and Southern Madison Ranges received two feet of snow last week (1.5-2.2” of snow water equivalent-SWE) and subsequently experienced a significant avalanche cycle. Yesterday, riders near Targhee Peak triggered an avalanche from off to the side that failed near the ground (details and photos). At Lionhead, Doug noted that there were “LOTS of avalanches” on all aspects and elevations and we are still worried about human-triggered slides (video, photos page). I toured to Ernie Miller Ridge to look a 1500’ wide, human-triggered avalanche that failed on sugary snow near the ground (video). We experienced some collapsing but the weak layers are adjusting and the sensitivity to triggering is decreasing.

Give this year’s weak snowpack more time to adjust before entering steep terrain and avoid slopes where increasing winds create fresh drifts. Utilize careful route-finding along with a conservative mindset today. Human-triggered avalanches are possible and the danger is MODERATE.

During and immediately following last week’s snow in Cooke City, many natural and human-triggered avalanches broke in at the interface between the old snow and the new snow on a thin layer of weak facets 1-2’ deep (details, photo, photo).  Other avalanches failed on a stripe of surface hoar or weak facets buried 3’ deep (details and photo, photo). Doug provides an explanation of these layers in his video from last week. Today, increasing winds will create fresh drifts of snow that will avalanche under the weight of a rider or skier. Recognize and avoid these areas by watching for plumes of blowing snow, feeling for harder or packed snow at the surface and noticing shooting cracks from your skis or sled.

Safe travel through and around avalanche terrain requires a thorough snowpack assessment and dialing back objectives if you notice any signs of instability such as recent avalanche activity, collapsing, or cracking. Human-triggered avalanches are possible and the danger is rated MODERATE.

Snow early last weekend in the Northern Gallatin, Northern Madison and Bridger Ranges primarily resulted in avalanches within the 7-11” of new snow such as slab avalanches observed in Beehive Basin and loose snow avalanches in Hyalite and the Bridger Range (photo, video, details and photos). Some avalanches, like those near Maid of the Mist in Hyalite and in Dudley Creek near Big Sky, broke deeper in the snowpack on buried weak layers (photo, photo). Today, avoid fresh drifts of snow created by increasing winds and carefully look for signs of instability as a reason to dial back objectives for the day. Human-triggered avalanches most likely within the top foot of the snowpack and the avalanche danger is MODERATE.

On Saturday, January 30th a skier died in an avalanche in Utah outside the Park City Ski Area boundary. The search and recovery efforts were initially delayed due to dangerous avalanche conditions and were completed on January 31st. We are deeply saddened by this loss of life. Preliminary details are available here. 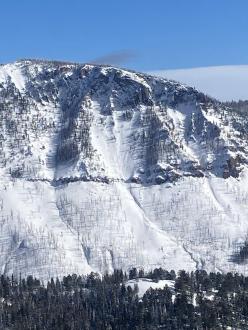 From Obs: "Skied up near Big Horn Peak today, around 100cm HS, a bit unsupportable 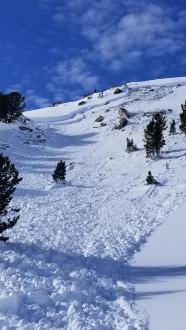 A snowmobiler triggered this avalanche on Monday (2/1/2021) at Lionhead. No one was caught. Photo 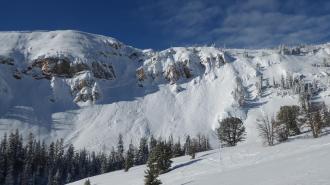 Many avalanches broke under the new snow and also deeper on facets. These natural slides