Good Morning. This is Dave Zinn with the Gallatin National Forest Avalanche Forecast on Monday, February 15th at 7:30 a.m. Today's forecast is sponsored by Spark R&D and the Yellowstone Club Community Foundation. This forecast does not apply to operating ski areas.

On Sunday at 11:44 a.m., a pair of splitboarders triggered an avalanche in Beehive Basin north of Big Sky. They were skinning up the slope when they felt the slope collapse and saw cracks spreading around them. One of them fought to grab trees and self-arrested. The avalanche carried the second rider downslope where he impacted a tree, was partially buried, and sustained critical injuries. The rider who was able to escape the avalanche activated Search and Rescue by calling 911 and descended the slope to provide care to his partner. Big Sky and Gallatin County Search and Rescue evacuated the injured rider and transferred care to Big Sky Fire Department and Life Flight. Sadly, last night the rider who was partially buried died from injuries sustained in the avalanche. Our sincere, heartfelt condolences go to the family and friends of those involved. Alex and Doug will go to the scene today, and we will provide more information in the coming days.

In the last 24-hours, the Bridger Range got 8” of fresh snow and the mountains near Big Sky, West Yellowstone, Cooke City, and south of Bozeman got 2-4”. Temperatures are around 10 degrees F except in the Taylor Fork and Cooke City where they are hoovering above and below 0 degrees F. Winds are blowing 5-15 mph from the southwest to northwest.

Temperatures will warm through the day with highs in the mid-teens F to low 20s F and winds will be 10-20 mph from the southwest. Continued snowfall will bring 5-8” by morning with more expected tomorrow.

The Bridger Range received 8” of snow last night equal to 0.4” of snow water equivalent-SWE. Wind from the west is blowing this snow onto slopes with a weak foundation of facets and depth hoar. Yesterday’s east winds loaded snow in unusual places before shifting back to the west. Smaller avalanches in wind-loaded terrain like the one witnessed on Saturday north of Bridger Bowl are likely today (photo and info), and these slides can break deeper on buried weak layers. Alex and I made the conservative choice to stay off steep slopes yesterday at the Throne due to this possibility (video). On non-wind-loaded terrain, avalanches will likely involve new snow only, but slides breaking on weak snow near the ground are a continual concern this season. The safest management strategy for deep slab problems is the avoidance of avalanche terrain. Careful snowpack assessment and terrain management are necessary if you choose to enter steep terrain. See the photos page and our avalanche activity list for a reminder of what recent slides look like.

A pair of snowboarders were caught and carried by an avalanche in Beehive Basin yesterday. One sustained critical injuries and passed away last night. We are grateful for the efforts of his partner, Big Sky and Gallatin County Search and Rescue, and the medical staff who provided care. Our sincerest condolences go out to the victim’s family and friends. Preliminary information and photos are available on the website and we will provide more details in the coming days.

Two to 4” of snow fell last night across the Gallatin and Madison Range and at Lionhead. The weight of the fresh snow will not fundamentally change the avalanche danger. Human-triggered avalanches are most likely within the new snow, but large avalanches breaking near the ground of a layer of weak facets and depth hoar remain a concern as we have seen recently at Lionhead, Portal Creek, and Cabin Creek. We are seven days out from the most significant snowstorm of the year and widespread red flags such as avalanches, collapsing or whumphing, and shooting cracks are less likely to give you a warning before a slide. Ian explained this setup in his video from Teepee Basin a few days ago. The safest mitigation strategy when deeply buried persistent weak layers are in play is avoiding steep terrain. If you choose to enter avalanche terrain, evaluate the snowpack carefully and manage your terrain by choosing areas without terrain traps, thus decreasing negative outcomes if something goes wrong. The avalanche danger is MODERATE and will rise as snowfall increases today.

The mountains around Cooke City received 3-4” of snow last night. This will not significantly change the avalanche danger. Doug just returned from a couple of days riding and touring and warned us that smaller avalanches triggered in recent days are signals that larger avalanches remain possible (video). Larger avalanches on Mount Abundance, Town Hill, Woody Ridge, Mount Zimmer, and in Hayden Creek drainage are examples of concerning types of terrain, wind-loaded, and snowpacks, thin and weak, as he explained in a second video. Human-triggered avalanches remain possible as evidenced by recent activity. Carefully manage your terrain choices by minimizing exposure to steep slopes and terrain traps. If you enter steep terrain, avoid the dual problem areas and carefully assess the snowpack for instability. The avalanche danger is MODERATE. 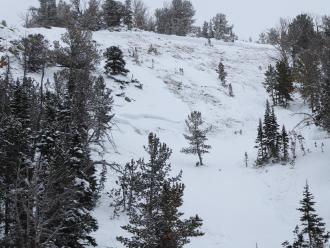 END_OF_DOCUMENT_TOKEN_TO_BE_REPLACED
Trees pushed over by large slide near Cooke 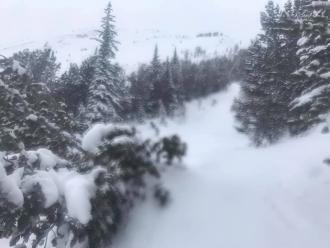 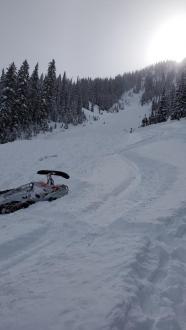 On 2/13/21 riders reported they triggered this avalanche, and remotely triggered two other slides. Nobody 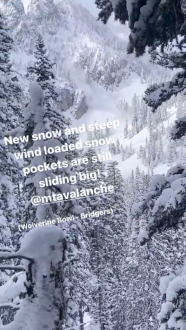