Good Morning. This is Dave Zinn with the Gallatin National Forest Avalanche Forecast on Tuesday, February 16th at 7:30 a.m. Today's forecast is sponsored by Gallatin County Search and Rescue and Montana State Parks. This forecast does not apply to operating ski areas.

On Sunday at 11:44 a.m., a pair of splitboarders triggered an avalanche in Beehive Basin north of Big Sky. They were skinning up the slope when they felt the slope collapse and saw cracks spreading around them. One of them fought to grab trees and self-arrested. The avalanche carried the second rider downslope where he impacted a tree, was partially buried, and sustained critical injuries. The rider who was able to escape the avalanche activated Search and Rescue by calling 911 and descended the slope to provide care to his partner. Big Sky and Gallatin County Search and Rescue evacuated the injured rider and transferred care to Big Sky Fire Department and Life Flight. Sadly, later that night, the rider who was partially buried died from injuries sustained in the avalanche. Our sincere, heartfelt condolences go to the family and friends of those involved. Alex and Doug went to the scene on Monday and made a video explaining Sunday’s events. We will complete a written accident report in the next day or two.

In the last 48 hours, the Bridger Range received 20” of snow equal to 1.5” of snow water equivalent-SWE. New and wind-drifted snow are likely to avalanche in steep terrain today under the weight of human triggers and avalanches breaking deeper into the snowpack on sugary facets near the ground are a growing concern as the weight of the new snow adds up. On Sunday, before the new snow fell, Alex and I choose to stay off steep terrain due to continued concerns about the weak structure of the snowpack (video). Today, obvious signs of instability such as fresh avalanches, collapsing or whumphing, and shooting cracks will be more likely. Heed these warning signs.

Careful snowpack evaluation, cautious route-finding, and conservative decision-making are essential due to dangerous avalanche conditions. Human-triggered avalanches are likely and the danger is rated CONSIDERABLE.

The Lionhead area and the Madison and Gallatin Ranges received 8-14” of new snow in the last 48 hours equal to 0.5-0.9” of SWE. Sunday’s fatal avalanche accident in Beehive Basin is a tragic reminder that slides breaking deep within snowpack on weak facets near the ground are a very real possibility. Preliminary information and photos are available on the website and we published a video explaining the events after our visit to the accident site yesterday.

Ongoing snowfall and wind-transported snow are adding weight to a structure near or reaching its failing point. Yesterday, skiers in the Divide Cirque saw two enormous avalanches that broke an estimated 1200-1500’ across and up to 6’ deep in wind-loaded, high elevation terrain (details and photos). Skiers near Hebgen Lake felt the snow in shallower, low elevation terrain whumphing as they toured toward their destination (details). This evidence along with avalanches at Lionhead, Portal Creek, and Cabin Creek within the last week tell us what we need to know (video from Teepee Basin). Avoid steep, wind-loaded terrain today and utilize a conservative travel plan along with careful snowpack evaluation. Human-triggered avalanches are likely in wind-loaded terrain and the danger is rated CONSIDERABLE. Avalanches are possible on non-wind-loaded slopes and the danger is MODERATE.

The mountains around Cooke City received 7” of snow in the last two days equal to 0.5” SWE. The snow is starting to add up and riders and skiers should stay off of steep slopes if they observe signs of instability such as recent avalanches, cracking, and collapsing (Small Avalanches are a Warning video). When Doug visited Cooke City last weekend he noted two areas of particular concern, the terrain where slabs of wind-drifted snow are loading slopes and terrain with a shallower and weaker snowpack (video). Numerous avalanches occurred within the last week on steep slopes where one or both of these factors existed (new photo West Woody Ridge, Mount Abundance, Town Hill, Woody Ridge, Mount Zimmer, Hayden Creek drainage). Today, evaluate the snow and terrain carefully avoiding these features of concern. Human-triggered avalanches are possible and the danger is MODERATE. 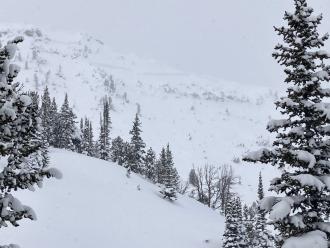 From obs: "The southwest corner of the cirque slid on the storm slab and broke 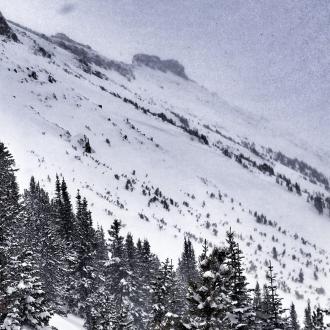 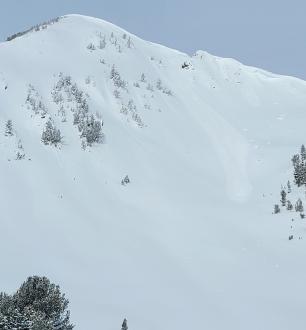 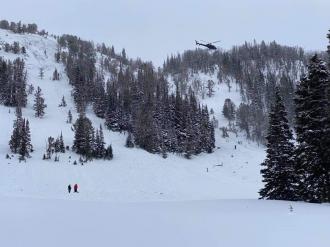