Good Morning. This is Doug Chabot with the Gallatin National Forest Avalanche Forecast on Thursday, February 18th at 7:15 a.m. Today's forecast is sponsored by Grizzly Outfitters and Montana Chevy Dealers. This forecast does not apply to operating ski areas.

In the last 24 hours the mountains around Bozeman and Big Sky picked up 4-5”, most of it falling last night while everywhere else remained dry. Temperatures are in the low single digits F and wind is light at 10-20 mph out of the west to northwest. Today will become partly cloudy and mountain temperatures will rise into the low 20s F. A southwest flow will drop 1-2” in the mountains tonight with light snowfall continuing Friday and Saturday.

The Avalanche Warning has expired.

“Wallow” was yesterday’s word of the day in the northern ranges. The storm ended in the morning and the 3 day total was 2-3 feet of snow around Bozeman and Big Sky and 1 ½ feet in the southern Madison and southern Gallatin Ranges. It was so deep that skiers complained it was hard to move on low angled terrain, which was not the case for those with a throttle. Weak, sugary snow at the ground is our primary weak layer and it needs time to adjust to the new load of snow (1.5-2.5” snow water equivalent-SWE). Yesterday, Ian and his partner porpoised their sleds up the Fairy Lake Road in the Bridger Range and then toured on skis. They did not see large slides, but stayed clear of avalanche terrain because of the Avalanche Warning (video).

In the southern part of the Madison and Gallatin Ranges the snowpack structure mirrors the north with weak snow near the ground. Last week in both areas we had human triggered avalanches resulting in 2 close calls (Cabin Creek, Portal Creek) and one death (Beehive Basin). The weight of the new snow will keep the avalanche danger elevated. Throughout the Bridger, Gallatin and Madison Ranges, triggering slides is likely. Be patient and allow the snowpack to adjust to the new load. A safe strategy is to avoid avalanche terrain (more than 30 degrees steep) because the avalanche danger is rated CONSIDERABLE on all slopes.

The mountains around Cooke City and West Yellowstone did not get any snow last night but have received 9” since the beginning of the week. Strong west to northwest wind Monday and Tuesday loaded slopes near the ridgelines. Dave is in Cooke City and got a good look around and dug a couple snowpits. He found two avalanche concerns: wind drifted snow near the ridgelines and thinner snow at high elevations where avalanches can release from (i.e. starting zones). He saw one wind slab that broke on Fisher Mountain (photo) and made a video explaining that triggering small slides is possible in specific locations. The same stability exists in Lionhead, however, the weak snow near the ground is more widespread. For today the avalanche danger is rated MODERATE on all slopes.

Here’s an AP article that quotes Dave Zinn about the snowpack and avalanches that have been occurring. 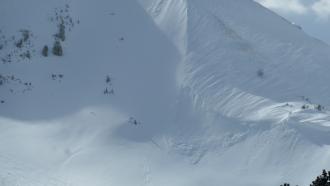 Wind-slab avalanche on the shoulder of Fisher Mtn. at about 10,000' elevation. This is the