Good Morning. This is Dave Zinn with the Gallatin National Forest Avalanche Forecast on Tuesday, February 23rd at 7:15 a.m. Today's forecast is sponsored by Cooke City Super 8/Bearclaw Bob’s and Alpine Orthopedics & Sports Medicine. This forecast does not apply to operating ski areas.

Winds are blowing 20-30 mph from the west to southwest gusting to 75 mph except in the Taylor Fork and West Yellowstone where they are 15-20 mph with gusts around 40 mph. Temperatures are in the mid-teens to mid-20s F. The Bridger Range and the mountains around Cooke City received 8-11” of new snow with 1-3” everywhere else. High temperatures will be in the low to mid-20s F and will drop through the day. West winds will be 25-35 mph and Cooke City will get another 3-5” of snow with 1-2” in the mountains around Bozeman, Big Sky, and West Yellowstone.

Last night, a storm in the Bridger Range dropped 8” of new snow equal to 0.8” of snow water equivalent-SWE and 1-3” in the Northern Gallatin and the Northern Madison Ranges equal to 0.2-0.3” SWE. Winds blowing 25-35 mph from the west to southwest and gusting to 75 mph are drifting recent snow into heavy slabs on slopes at many elevations that will sensitive to human-triggers. When I went to look at a 10’ deep snowmobile-triggered avalanche in McAtee Basin on Sunday, the wind had deposited a 1-2’ deep slab of drifted-snow on the bed-surface in less than 24-hours (photo, video). While snow fell last night, as far as the snowpack is concerned the loading has been going on for days. Recent avalanches are evidence of the danger. These include several very large, natural avalanches in the Northern Gallatin Range, natural avalanches in the Bridger and Northern Madison Range that failed near the ground, several snowmobile-triggered slides near Buck Ridge, and a fatal avalanche in Beehive Basin just over a week ago. See the photos page and the avalanche activity page on our website for images and more information about these events.

Avalanches within the new and freshly drifted snow are likely today, more destructive, deep-slab avalanches are possible. As the snowpack gets deeper, obvious signs of instability will be less forthcoming prior to an avalanche, a conservative mindset is advisable this season due to persistent weak layers buried near the ground. Today, avoid wind-loaded avalanche terrain and the runouts below. The danger is CONSIDERABLE on wind-loaded slopes and MODERATE on all others.

Eleven inches of snow fell last night in Cooke City equal to 1.1” of SWE and southwest winds gusting to 60 mph are readily drifting recent snow into slabs that will avalanche under the weight of a skier or rider today. Larger, deep-slab avalanches like last week’s slide on Crown Butte (photo) or the slide on Mount Abundance two weeks ago (photo) are possible. Avoid steep wind-loaded terrain and avalanche terrain you suspect harbors a shallow, weak snowpack such as thin, rocky areas in high-elevation starting zones or lower-elevation slopes that generally receive less snow. An example of a lower elevation slope is Town Hill, where skiers triggered a collapse that spooked them into avoiding steep terrain 3-days ago (details). The danger is rated CONSIDERABLE on wind-loaded slopes and MODERATE on all others.

The Southern Gallatin Range, Southern Madison Range, and Lionhead area received 2-4” of new snow in the last 24-hours equal to 0.2-0.3” of SWE. A layer of weak facets and sugary depth hoar near the ground makes large, human-triggered avalanches possible. Skiers near Specimen Creek observed natural avalanche activity over the weekend and triggered two large collapses indicating that human-triggered avalanches on steep slopes remain possible (photo). Gusts of 40 mph from the southwest are depositing slabs of wind-drifted snow onto slopes that add weight and increase the likelihood of triggering an avalanche. Evaluate the terrain and snowpack carefully prior to considering skiing or riding on steep slopes. The danger is MODERATE.

There was another avalanche fatality yesterday in Grand Teton National Park (press release). We are sadly on track to have 40 avalanche deaths in the United States in a season for the first time since the winter of 1925-26. This is not a statistic that we want to reach. 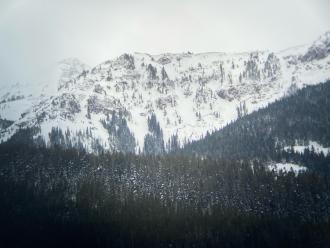 From Obs: "This slide on the ridge extends north from Blackmore above Blackmore lake. The 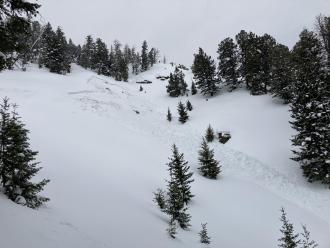 From obs: "Observed 2 natural avalanches, both on the basal persistent layer I would guess 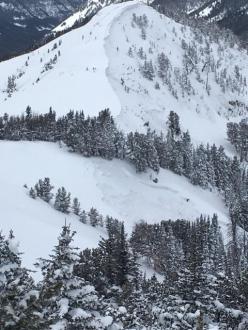 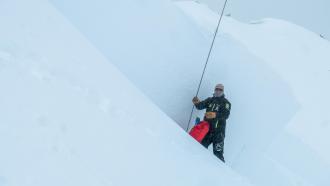 This large hard-slab avalanche was snowmobile-triggered on Saturday (2/20). It broke nearly 10' deep and