Last night the Bridger Range received 7” of new snow, near Cooke City got 2”, Hyalite and Big Sky got 1” and near West Yellowstone got zero. This morning temperatures are teens F, except near West Yellowstone where temperatures are high 20s F. In the Bridger Range wind is easterly at 20-25 mph with gusts to 40 mph, and elsewhere wind is northerly at 5-10 mph. Today, temperatures will be teens to mid-20s F with wind out of the north-northeast at 5-15 mph. Continued snow showers will deliver 1-3” by this evening. Tomorrow, under clearing skies, temperatures will be teens to 20s F with light northerly wind. During the middle of the week, clear skies will accompany temperatures in the 30s to low 40s F with light to moderate east wind. The next chance for snow is late Thursday through the weekend

New snow creates avalanche hazards for the next few days. Potentially dangerous avalanche conditions exist where the mountains received more snow, especially on slopes where east wind drifted the snow into thicker slabs that a person could trigger. When skies clear and temperatures warm tomorrow or Wednesday, expect wet loose avalanches which could be large and harmful where more new snow fell.

Carefully and continuously evaluate the stability of the new snow. Be extra cautious of wind-loaded slopes and watch out for drifts in less common locations due to the east and north winds. Anticipate stability to change through the day and between different aspects and elevations. Spring weather is highly variable which creates highly variable stability. Don’t let your guard down, and continue to be diligent with safe travel practices. Carry proper, functional avalanche rescue gear and only expose one person at a time to avalanche terrain.

Avalanches breaking deeper than the new snow are unlikely, but not completely ruled out for the season. Over the past weekend, students in an avalanche class near Big Sky found the weak, sugary snow at the base of the snowpack still exists on cold, shady slopes (photo). Keep this weak layer in mind for the possibility of deeper wet slabs if there are extended above freezing temperatures, or the small chance dry slabs could break on this layer on cold, shady slopes. Our season snowpack summary video highlights this poor snowpack structure. See below for additional general spring snowpack and travel advice.

Bridger Bowl is closed, and backcountry conditions exist (video). There is no avalanche mitigation or ski patrol rescue. Please stay clear of work areas, snowmobiles, chair lifts and other equipment. 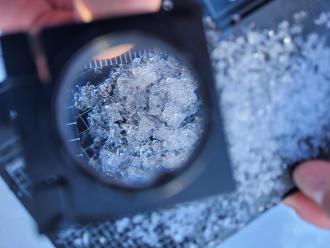