Good Morning. This is Doug Chabot with the Gallatin National Forest Avalanche Advisory issued on Tuesday, February 16, at 7:30 a.m.  ProLite Gear in cooperation with the Friends of the Avalanche Center, sponsor today's advisory.  This advisory does not apply to operating ski areas.

Most mountain ranges got one to two inches of new snow yesterday with Shower Falls in Hyalite seeing three inches.  Winds have been light at 10 mph out of the west to southwest with temperatures dropping from the high twenties yesterday afternoon to the teens this morning.   Today will be mostly cloudy with light winds and mountain temperatures reaching the mid to high twenties.  Scattered showers will bring a trace to one inch of new snow by morning.

The Bridger, northern Madison and northern Gallatin Ranges, the mountains around Cooke City and the Washburn Range:

We are still feeling the effects of instability from the weekend's snowfall.  A lot of weight (almost 3 inches of water/ 24+ inches of snow) was added in the Bridger Range with half that in the northern Madison and Gallatin mountains and Cooke City.  Both natural and human triggered avalanches were rampant.  On Sunday, separate groups of backcountry skiers triggered a large avalanche on the SW face of Lone Peak and a big slide in Beehive Basin.  On Buck Ridge a snowmobiler triggered a small avalanche which was on the heels of a lot of natural activity Saturday.  Eric explored Buck Ridge on Sunday (video) and saw fresh slides on many aspects with a wind load.  A large natural avalanche near Brackett Creek in the Bridger Range on Saturday broke near the ground 3-5 feet deep on facets from early December.  On slopes above Truman Gulch a skier got the new snow to avalanche too.  Not to be left out, even far south in Cooke City there were two natural slides on Crown Butte, the second time one of these slopes has run.  Our photos page is filling up with great pictures documenting the action.

Most slides are breaking under Friday's snowfall on small-grained facets, but some slopes are avalanching even deeper. For today, the avalanche danger is rated CONSIDERABLE on all wind-loaded slopes steeper than 35 degrees and MODERATE on all other terrain.  Although the winds have been calm the past few days I'm still concerned with slopes near the ridgelines that got loaded from the weekend's new snow and strong winds.

The southern mountains from Big Sky to West Yellowstone have a buried layer of surface hoar which is breaking clean 1.5 to 2 feet deep.  Near Hebgen Lake on Sunday a skier released an east facing wind-loaded slope (photo).  In addition to the avalanche he also got several large collapses and cracks. Being prudent they skied slopes no steeper than the low 30s.  Ace Powder Guides called in a second hand report of a snowmobiler triggering and getting buried in an avalanche in the Lionhead area yesterday.  A piece of the rider's orange helmet was showing in the debris and it took about 45 minutes to dig him out.  He was miraculously uninjured.

Although the southern half of our advisory area only picked up 6-8 inches of snow this weekend, the buried surface hoar is straining to support this small load. Slopes that were drifted by the wind will continue to be unstable too. And if that's not enough to worry about, be aware that facets near the ground are occasionally breaking clean in our stability tests.  The difference between the surface hoar and depth hoar is the difference between a two foot and five foot crown line.

Join the Friends of the Avalanche Center for a FREE 2-hour beacon practice from 6 p.m. to 8 p.m. on Thursday, February 18th.  All ages welcome.

A skier cut this p wind slab on an east facing slope.  He also got 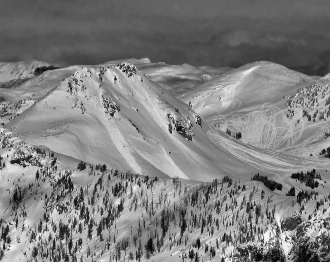 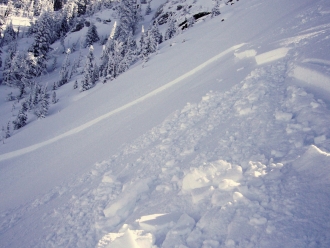 A skier triggered, but was not caught, in this shallow slide as he dropped into 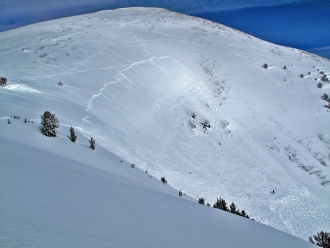 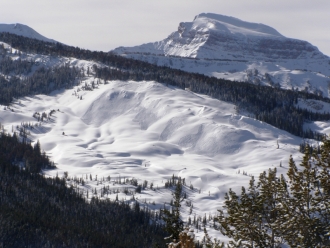 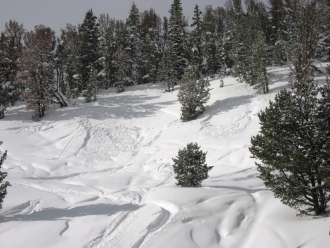 Small slides like these are indicative of instability on the bigger, higher slopes too.  These 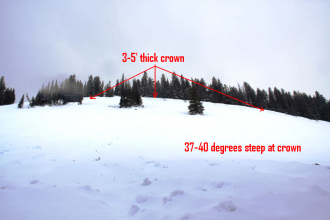 From an email: "As we approached the slope today, we immediately noticed that there wasn't 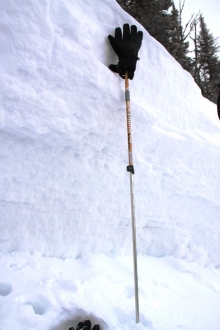 This is the crown from the accompanying photo "Bridger Range Natural Avalanche".  It broke naturally