Good Morning. This is Doug Chabot with the Gallatin National Forest Avalanche Advisory issued on Wednesday, February 17, at 7:30 a.m.  Gallatin County Search and Rescue, in cooperation with the Friends of the Avalanche Center, sponsor today's advisory.  This advisory does not apply to operating ski areas.

In the last 24 hours the northern mountains picked up 1-2 inches of snow with the southern regions getting only a trace to one inch.  The Bridger Range got windy yesterday afternoon with steady ridge speeds of 35-40 mph.  Currently they're at 25-30 mph while the rest of the forecast area is only getting light 10-15 mph breezes. Mountain temperatures are in the high teens to low 20s where they'll remain today.  Under mostly cloudy skies, small weather disturbances will drop another 1-3 inches by tomorrow morning.

Yesterday morning at 11 a.m. a person triggered a large avalanche on Saddle Peak.  Extreme luck was involved as no one was caught.  A cornice the size of a VW van broke as a skier walked towards the edge of the ridge at the summit.  The block slid downhill and triggered the avalanche.  It broke 3-6 feet deep and went 1,000+ feet wide wiping out hundreds of ski tracks from Monday.  A powder cloud was seen by most people at the ski area.  Our Photos page of the website is filled with pictures which are more vivid than my words can describe.

The Bridger Range got a heavy snow load of 2 ½ feet of snow, or 3 inches of water weight, over the weekend.  Strong winds created thick slabs adding further weight to the slope.  And although skiers got lucky and didn't trigger it, the thousand pound cornice did.  And the avalanche broke deep. It fractured on a layer of facets underneath the hard slab that we identified as a problem back on December 17th.  Karl and I made a video that day which is well worth seeing again (video).  After I turned off the camera I sarcastically said to him, "This is the video we're going to watch in Feb to explain why Saddle slid." And here we are.

The winds picked up yesterday afternoon and loaded slopes near the ridgeline even further.  The rate of loading was fast enough that Mark and I opted to call off the search for possible missing skiers since a dozen of us were standing under the maw of another huge avalanche path.  Also yesterday, snowmobilers saw a huge avalanche, likely from the weekend, in the Throne/Flat Iron area of the northern Bridger Range.  It pulled out trees 20 inches in diameter and ran ¼ mile wide.

With continuing strong winds and plenty of snow available for transport, for today the avalanche danger is rated CONSIDERABLE on all wind loaded slopes.  On slopes without a wind load, the danger is MODERATE, which means it's still possible to trigger avalanches.

Northern Madison and northern Gallatin Ranges, the mountains around Cooke City and the Washburn Range:

Shower Falls up Hyalite has gotten 5-6 inches of snow in the last two days, about double the amount in the northern Madison Range.  Winds have been light and the ski patrols around Lone Peak are reporting soft slabs that are releasing on ski cuts and explosives.  Natural avalanches were seen in Beehive Basin that likely released on Monday.  Skiers triggered slides in there over the weekend while further south on Buck Ridge snowmobilers were able to do the same. Outside Cooke City on Sunday snowmobilers triggered slides on Crown Butte too.  Scroll through our Photos page to see many pictures of natural and human triggered slides from the weekend.

Weak facets, recently buried by the new snow, is creating instability from Mt. Ellis, where skiers found it in multiple snowpits, to Moonlight Basin where the Ski Patrol was able to trigger slides on it.  Some avalanches are also breaking deeper on facets near the ground.  Regardless of the weak layer it's still possible to trigger slides today, especially on steep wind-loaded slopes that got drifted over the weekend. For today, the avalanche danger is rated CONSIDERABLE on all wind-loaded slopes steeper than 35 degrees and MODERATE on all other terrain.

Buried surface hoar hiding 1.5 to 2 feet under the surface is our primary avalanche concern in the southern mountains.  Over the weekend a skier got large collapses and cracks on this layer and even triggered a wind-loaded slope at a ridge line near Hebgen Lake. A snowmobiler was also buried on Monday in the Lionhead area, although we don't have specifics on the slide other than he was dug out uninjured.  Our secondary avalanche concern is large sugary facets at the ground which are breaking clean in our stability tests.

The snowpack is weakest in the mountains south of Big Sky to West Yellowstone. They only got 8-10 inches of snow since Friday, but it was enough to bump up the avalanche danger, especially where slopes got the extra burden of wind loading.

Mark will issue the next advisory tomorrow morning at 7:30 a.m. If you get out in the backcountry let us know what you find.  You can reach us at 587-6984 or email us at mtavalanche@gmail.com.

Take a hard look at the photos.  If you skied off the summit on Monday and find that your tracks are now obliterated, I'm asking, "What did you do to arrive at the decision to ski that slope?" Now that it slid there's no real argument about whether it was stable or not.  It wasn't.  But hundreds thought it was good to go.  Perhaps I would have been one of them.  But I know I'd want to puke looking at those photos knowing how close I would have been to dying.  Seeing other tracks in fresh powder is commonly mistaken as a sign of stability, but it's not.  Folks think that slopes that get skied often are safer because the weak layer gets broken down and compacted by the tracks.  But in this case the weak layer was impervious to tracks because it was preserved under a supportable hard slab.  Supportable until yesterday.

We are extremely lucky.  I could just as easily be writing my condolences to 15 families this morning. Many people would have died if the slope slid the day before or a few hours later.  Most days skiers are stacked on top of one another exposed to avalanches from above. Luckily it was triggered early in the day with few skiers around. Consider this avalanche the one and only free wakeup call we'll ever get.  There's a lot to learn.  The slope slid on a beautiful day with many tracks on it. It was undeniably unstable yet provides us with an opportunity to re evaluate how we ski, make decisions and travel in the sidecountry.

Join the Friends of the Avalanche Center for a FREE 2-hour beacon practice from 6 p.m. to 8 p.m. on Thursday, February 18th.  All ages welcome. 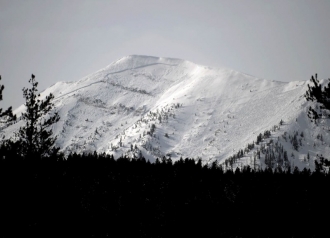 This pictures says it all. The slope that slid was littered with tracks like the 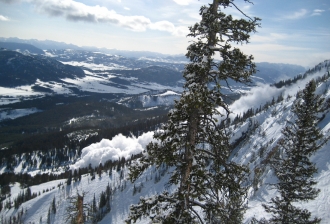 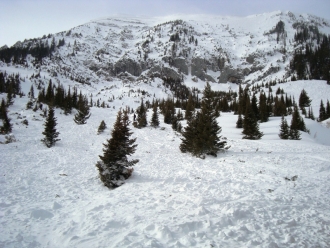