Good Morning. This is Doug Chabot with the Gallatin National Forest Avalanche Advisory issued on Tuesday, December 13th at 6:45 a.m. Today’s advisory is sponsored by Grizzly Outfitters in partnership with the Friends of the Avalanche Center. This advisory does not apply to operating ski areas.

Yesterday, Eric and I investigated the avalanche that killed a skier on Henderson Mountain outside Cooke City. The skier was in a party of 5 and his descent was the 7th track on the slope when it avalanched. He was carried into the trees and buried under 5’ of snow. Another person was buried to his waist, uninjured, as he stood in the runout zone. The victim was found with avalanche transceivers and dug up in 15-20 minutes. CPR was initiated, but unsuccessful as trauma was a likely factor in his death. The slope was only 250 vertical feet, but steep, averaging 40 degrees. The crown was 3’ deep and the path was 150’ wide. The avalanche broke on a layer of weak, sugary facets sitting on an ice crust 1’ above the ground.

Our deepest sympathy goes out to his family and friends and his Ketchum, Idaho community.

Here is a video and 7 photos from our investigation.

In the last 24 hours the mountains around Big Sky and Cooke City picked up an inch of snow. Skies are clearing, temperatures are zero to 10F and winds are blowing 20-30 mph with gusts in the 40s out of the west to northwest. Today will become mostly cloudy and remain windy with mountain temperatures climbing into the teens. A trace to one inch of new snow may fall in the southern mountains tonight. Another storm will hit Wednesday evening with subzero temperatures by weeks end.

The snowpack structure is poor. A weak layer undermines all the new snow that has fallen and on many slopes this layer is collapsing and avalanching with the weight of a skier or snowmobiler. The weak layer is 2-4 mm sized grains of angular, faceted snow that is not cohesive or strong. Like sugar, it falls out of our hand when we grab a fistful.

We look to ski areas this time of year since they have a snowpack similar to the backcountry. Small explosives are making big avalanches, a worrisome outcome. Southwest Montana had avalanche activity and other signs of instability on 9 of the last 10 days. Check out our Weather and Avalanches Log for the details. The snowpack is unstable and still a threat. To recap:

My recommendation is twofold:  First, watch the last 7 days of our videos and look at the photos page to familiarize yourself with this deadly layer.  Second, put your shovel in the snow and dig to the ground. If the faceted layer is there, back off and don’t expose yourself to avalanche terrain. Since triggering avalanches is likely, the avalanche danger remains CONSIDERABLE.

I will issue the next advisory tomorrow morning at 7:30 a.m.

We rely on your field observations. Send us an email with simple weather and snowpack information along the lines of what you might share with your friends: How much new snow? Was the skiing/riding any good? Did you see any avalanches or signs of instability? Was snow blowing at the ridgelines? If you have snowpit or test data we'll take that too, but this core info is super helpful! Email us at mtavalanche@gmail.com or leave a message at 406-587-6984. 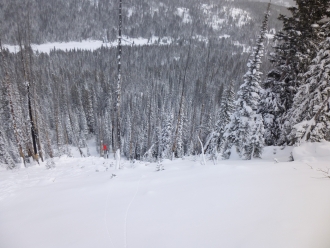 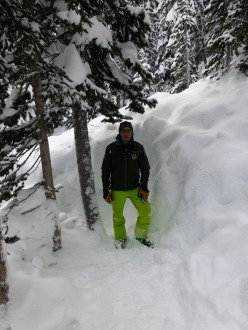 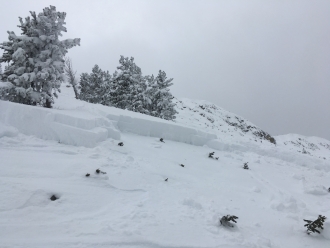 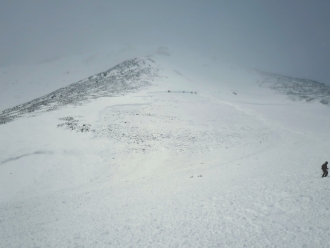