Good Morning. This is Eric Knoff with the Gallatin National Forest Avalanche Forecast issued on Friday, December 21st at 7:00 a.m. Today’s forecast is sponsored by Grizzly Outfitters and the Friends of the Avalanche Center. This forecast does not apply to operating ski areas.

Overnight a trace to one inch of snow fell in the mountains south of Bozeman including Cooke City. At 5 a.m. temps range from the teens to mid-20’s F and winds are blowing 30-60 mph out of the west-southwest with gusts near Big Sky breaking 70 mph. A fast moving front this morning will deliver 1-3” of snow. This storm will be short lived and snow tapers off by late morning. Highs today will warming into the mid to upper 20’s and winds will remain strong out of the west-southwest. No snow is expected tonight or tomorrow.

This morning, winds are blowing 30-50 mph in mountains near West Yellowstone. Strong winds combined with fresh snow will create thick wind drifts on slopes loaded by west-southwest winds. These drifts will be resting over a weak and fragile snowpack (video, video). Any steep slope with wind drifted snow will be highly susceptible to human triggered avalanches. Non-wind loaded slopes will be less prone to slides, but still need to be approached with caution.

The message is simple today: fresh snow, strong winds, and a weak snowpack will create dangerous avalanche conditions.  The best defense against avalanches today will be terrain management. Avoid slopes steeper than 30 degrees and stay off low angle slopes connected to steep slopes above.

The primary avalanche problem today will be wind loaded slopes. This morning, winds are gusting over 70 mph on the summit of Lone Peak and 30-60 mph elsewhere. Strong west-southwest winds combined with a few inches of new snow will form a fresh batch of wind slabs that will be touchy to human triggers. On many slopes, wind deposited snow will be adding stress to a thin layer of facets buried in the upper foot of the snowpack.

Yesterday, Alex found this layer to be the primary avalanche concern in the mountains around Cooke City (video, photo). This is consistent with our field data and observations from the past few weeks (photos, videos). Today, watch for and avoid wind loaded slopes and pay attention to signs of instability such as cracking and collapsing. These are obvious clues the slope is unstable. Fortunately, the lower portion of the snowpack is mostly strong and stable which will keep instabilities isolated to new and wind-blown snow.

Check out our new “Avalanches and Snowpits” menu item where we list all the reported avalanche activity. 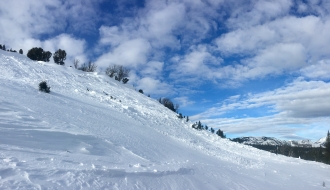 This wind-loaded slope was triggered Sunday morning (12/16) by a snowmobiler.