Good Morning. This is Alex Marienthal with the Gallatin National Forest Avalanche Forecast issued on Sunday, December 23rd at 7:00 a.m. Today’s forecast is sponsored by Gallatin Valley Snowmobile Association and Alpine Orthopedics. This forecast does not apply to operating ski areas.

This morning, temperatures are single digits to low teens F and rising from overnight lows near and below zero F. Over the last 24 hours, wind was southwest to west at 15-25 mph with gusts in the 30s and there is no new snow in the mountains. Clouds will increase today, and light snow is expected late morning with wind out of the southwest at 20-35 mph and temperatures in the low 20s F. By tomorrow morning the mountains will have 2-3” of new snow near Bozeman and Big Sky with 3-5” near West Yellowstone and Cooke City.

In the Lionhead area near West Yellowstone, the southern Madison and southern Gallatin Ranges, the lower half of the snowpack is weak, sugary facets. Last week, Eric found this weak snowpack near Bacon Rind (video) and Doug saw it near West Yellowstone (video). Snow and wind on Friday added weight and formed unstable slabs over this weak foundation. Yesterday, skiers at Bacon Rind in the southern Madison Range heard three “whumphs” in low angle meadows when the unstable snowpack collapsed under their skis (details). Slopes with drifts of snow that formed from strong wind on Friday will be the most susceptible to avalanches. However, all steep slopes should be carefully assessed before riding, and avoided if they have a thick slab of snow resting on weak, sugary facets. Today, avalanches are possible to trigger and avalanche danger is MODERATE.

In the mountains near Bozeman, Big Sky and Cooke City, avalanches are possible to trigger on wind loaded slopes. On Friday, 2-6” of new snow was drifted into fresh slabs by strong southwest wind (video). These fresh slabs add weight to a layer of weak facets buried 10-12” deep on some slopes, and create an unstable structure. Avalanches were triggered on this layer on wind loaded slopes last week (Avalanche Activity, video), skiers in Hyalite got unstable test results on this layer yesterday (photo), and I found it near Cooke City on Thursday (video, photo). Eric found this layer in the northern Madison Range yesterday, and shows in his video that below this layer the snowpack is generally strong and avalanches breaking deeper are unlikely. Today, avalanche danger is MODERATE on wind loaded slopes and LOW elsewhere.

See Alex’s recent article about the Lift-accessed Backcountry of Saddle Peak. Be prepared with the necessary knowledge and skills before leaving the ski area into this complex and deadly terrain. 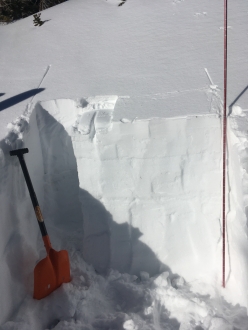 This pit was dug near Maid of the Mist in Hyalite. 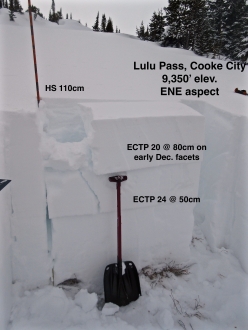 This wind slab released as a result of an intentional ski cut. 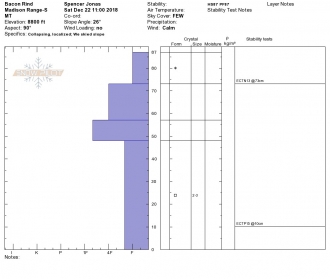