Good morning. This is Ian Hoyer with the Gallatin National Forest Avalanche Forecast on Christmas Eve, Friday, December 24th at 7:00 a.m. This information is sponsored by Blitz Motorsports and Yamaha and Grizzly Outfitters. This forecast does not apply to operating ski areas.

Since yesterday morning, Cooke City and Lionhead each got 11” of new snow, 9” fell at Bridger Bowl, 7” in the southern Madison Range, and 3-4” elsewhere. Winds are strong out of the southwest at 20-30 mph, with gusts as high as 70 mph. Winds have backed off a bit this morning and will continue from the southwest at 10-20 mph with gusts up to 30 mph. Another 1-3” will fall by tomorrow morning with up to 5” in Cooke City.

A big dump of new snow with strong winds means that human triggered avalanches are likely today. The Fisher Creek SNOTEL site is showing 18” (1.8” Snow Water Equivalent) of snow over the last 48 hours and we’ve received reports of substantially more snow at higher elevations. You could trigger an avalanche within the new snow (especially in wind drifts), on a layer of weak snow in the middle of the snowpack, or on weak snow at the ground. Don’t get caught up in the details - with so much new snow, wherever a slide breaks it will be large and dangerous. Keep it simple. Stay off of and out from under any slope steeper than 30 degrees. Human triggered avalanches are likely and the avalanche danger is rated CONSIDERABLE.

Seven inches of new snow (0.7” SWE) isn’t enough to spike the danger, but does mean it’s possible to trigger dangerous avalanches on steep slopes that are either wind drifted or have weak snow at the base of the snowpack (Tepee Basin video). Look out for particularly deep wind-drifts or slopes where a small slide could pile up deeper in a gully or push you into obstacles. Human triggered avalanches are possible and the avalanche danger is MODERATE.

Fresh wind drifts are the primary concern near Bozeman and Big Sky. Yesterday, Alex and Doug triggered a small wind slab while looking at the snowpack on Saddle Peak (video). With new snow and strong to extreme winds overnight, expect to find fresh reactive wind drifts on many slopes. While the lower snowpack is generally stable (Buck Ridge video, Beehive video), yesterday, Big Sky Ski Patrol used explosives to trigger a 5 ft deep avalanche that broke on weak snow near the ground. Let this be a wake up call and reminder to not discount the basal weak layers that exist across our advisory area. The avalanche danger is rated MODERATE on wind-loaded slopes and LOW on all others.

This great video from Avalanche Canada and Forecast Ski Magazine documents a skier triggered avalanche last season near Revelstoke and a textbook rescue. Practice and training save lives. 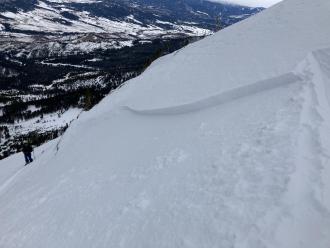 We intentionally triggered this 6-8" deep wind slab on Saddle Peak on December 23, 2021, E 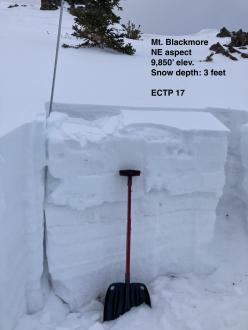 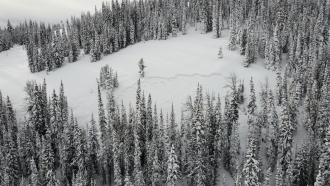 An avalanche in Tepee Basin appears to have failed within or under the new snow around 12/15/21. Photo